*Shipping to US & Canada

The Best Washcloths for Sensitive Skin♥

Having sensitive skin herself, she knew how hard this type of working environment could be on skin and wanted to try our soft face cloths (she'll tell you what she loves about our washcloths a little later in her interview).

And because she was such an interesting person, we wanted to dive a little deeper into her background, and give you a behind-the-scenes look at what it's like being a make-up artist in the New York entertainment industry, plus a few tips for sensitive skin types.

When I first heard from Christina a few months ago, she was working as the Dept. Head for the hit TBS show Search Party and was looking for a good sensitive skin washcloth for the actors.

Meet: Christina Grant, a New York based make-up artist who's creative work has graced the faces of Broadway, Opera, SNL, Orange is the New Black, Search Party and more.

​Find out what it's like being a make-up artist for the stars, plus her own take on sensitive skin care.​

Occupation:
Make-up artist. I went to school for theater and did acting, but I don’t act professionally.

Background, shows you've worked on and current projects:
After graduating, I moved to NYC and worked on the Broadway show, 42nd Street as a wig swing. (A swing is essentially an understudy for the HMU staff).

From 2004-2015 I worked on Broadway doing makeup for shows such as Beauty and the Beast, Tarzan, Shrek: The Musical, and spent 6 years as the assistant makeup supervisor for The Lion King. I’ve worked at the Metropolitan Opera and for Cirque Du Soleil.

In 2014 I had my daughter and decided to switch to full-time TV/Film work in 2015. While the hours are earlier and longer in TV/Film - I was often home for dinner and had weekends off, which is not a luxury you get on Broadway.

I had worked for years for Saturday Night Live doing makeup for their pre-taped bits and had worked on movies like Across the Universe and Black Swan.

My first full time TV gig was on Orange is the New Black, which I am currently working on for their final season.

In the fall I was the Dept Head for the TBS show Search Party, which is in its 3rd season.

Share a few favorite actors you've worked with:
Brian Darcy James, who played Shrek, in Shrek The Musical, was an absolute dream to work with. He was covered in prosthetics 8 shows a week for a year and he never complained and was just a delight. We had a lot of laughs in his dressing room while getting him ready.

Also the cast of Search Party holds a special place in my heart. Very funny people and a lot of fun to work with.

What type of make-up do actors wear?
It really depends on the actor’s skin and what we are trying to achieve with the look. On Orange is the New Black they are in a women's prison - so we kind of want people to look terrible. Often they might get a little concealer and nothing else.

If you are working on a period look, you want to try to mimic the style of the time. In the 1990’s, for example, people weren’t highlighting and contouring their face the way they do now. A matte look was more in style. So a lot of current trendy makeup brands wouldn’t work for something like that.

For just a general makeup, I prefer foundation that gives some coverage but that you can still see skin through - making the actor look like a nicer version of themselves without looking like they have a truckload of makeup on.

How many hours a day do actors typically wear the make-up and how does it affect their skin?
Often the actors aren’t at work as long as we are, usually. A typical day for the MU artists are 12-14 hours (though I have done a 21 hour day once). But there are instances of actors being in MU for 8-12 hours (or more depending on what is being shot that day). We get them ready at the start of the day and then sit on set watching the monitors to touch them up as needed as the day goes on. Usually we do a big touch up after lunch.

You reached out to us looking for a sensitive skin washcloth option for makeup removal, are skin sensitivities common among the actors you've worked with or know of?
Some people can tolerate that long in MU but some with sensitive skin can have breakouts. If I am full time staff on the show I try to also figure out a skin care regime with them so that we can keep their skin happy. Happy skin makes my job easier.

Sometimes we have FX or tattoo transfers that can be tenacious to get off. We have to use chemical solvents to remove and some people can have adverse reactions. We had an actress in Orange who wore a fake tattoo and her skin reacted to the remover. We would have to use hot towels and massage coconut oil to break down the tattoo for her because she couldn’t tolerate anything else.

What do you love about Fairface Washcloths and the benefits you see in using our washcloths for yourself, other make-up artists and actors:
Fairface washcloths are so nice for makeup removal! Especially for sensitive skin! On days where actors are outdoor and working in a harsh weather environment getting their faces windblasted - the last thing you want is to wipe off makeup with a rough terry cloth washcloth. I wet them and then throw them in the towel warmer or microwave so they are warm and make makeup removal a dream. I’ve used it them on myself when I am having a sensitivity breakout and they feel really great.

What's your personal experience with sensitive skin & what other products do you use and recommend?  (*Affiliate links included. See full disclosure below)

I, myself, have Rosacea that affects my skin as well as my eyes. I tend to have flare ups if I eat a lot of gluten, am exposed to cold and wind, or drink a lot of wine ??. The worst is the wind damage. When we shoot outside we work in all sorts of weather. I often try to use a thermal skin protectant [Fairface product recommendation try: La Roche-Posay Toleriane Sensitive Moisturizer] before working outdoors, and then use the Dermalogica Ultra Calming line products to get my face to calm down. Dermalogica's UltraCalming cleanser and Barrier Repair are essential to my skin care routine.

I tend to not wear makeup unless absolutely necessary. Because my eyes are also affected I have to use lubricating drops [Fairface product recommendation: try Refresh Optive] and Eye Scrub to keep my eyes happy.

When I do wear makeup I either mix Dr Hauschka’s Translucent Bronze Concentrate into a moisturizer as my base or if I need more coverage I like the Koh Gen Doh Aqua foundation. Milk makeup makes a mascara called “*Weekend Lash Stain” that kind of tints your eyelashes and I can usually tolerate that one. Lavera also makes a mascara that I can tolerate for a longer period. [*Fairface substitute recommendation - we couldn't find Milk's lash stain, but you could also try their KUSH High Volume Mascara]

The sunscreen I like to use for myself is the Dermalogica Super Sensitive Shield SPF 30. On “Search Party” our lead actress liked the Suntegrity Tinted sunscreen. It has a nice light application with some color coverage.

Other skin care tips you'd like to share:
My biggest tip for happy skin is to make sure you aren’t stripping it with a harsh cleanser and to be careful in using scrubs and masks. The Dermalogica Daily Microfolient  (I swear I don’t work for them!) is the only one I recommend for people who like to scrub every day. It does the job but is gentle enough for daily use. Masks aren’t necessary for every day. Cleaning your face every day, cleaning your brushes after every makeup application, moisturizing and drinking plenty of water is key to healthy and happy skin.

We have absolutely loved getting to know her better - what an interesting person, with so much wisdom to share! Thank you Christina!

*Disclosure: We have included links, for your convenience, to Christina's favorite skin care and make-up products, as well as a few of our own recommendations. As an Amazon Associate I earn from qualifying purchases through Amazon.com. 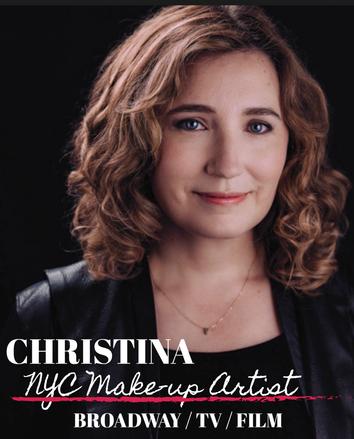 Have you ever wondered what goes on behind the scenes of a Broadway play, Film

​What does it take to make all those good looking people look even better?